As the New York art world prepares for its fall season, Galerie Templon, one of France’s leading galleries, opened a new outpost in Chelsea on Wednesday. The new two-level exhibition space has been beautifully renovated and is inaugurated with a dazzling show of new work by Senegal-born, Geneva-based artist Omar Ba.

The New York expansion has been in the works for less than a year and they settled on the 10th Avenue location in January. Mathieu Templon, the son of the gallery’s founder Daniel Templon, moved to New York in July to oversee construction at the new location and then manage its operations. Templon had previously lived in New York when he worked for Sean Kelly before taking over Templon’s Brussels space. 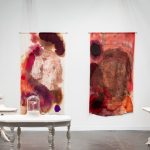 “I’m excited to be in New York—it’s the city that I love,” he told ARTnews during a tour of the new gallery on Wednesday morning. “I always had the idea in my mind to come back. No matter what people say, New York is the capital of the art world.”

Formerly the home to Kasmin and renovated by architect Markus Dochantschi’s studio MDA, the 6,500-square-foot space is roughly the same size as the larger of Templon’s Paris locations. “I wanted it to have a whole different feel in taking over the space,” Templon said. “This is like the real New York Chelsea space. We tried to put in a bit of charm, putting in these hardwood floors.”

The driving force to open in New York, Templon said, was to be able to show the work of their artists in the city, as many of them had not had New York representation. The second reason was to be able to interact more regularly with the gallery’s U.S.-based collectors, instead of just seeing them once or twice a year at an art fair.

He sees the New York space as an extension and a combination of the Paris and Brussels operations of the gallery, with Paris being the flagship program for some of the world’s leading artists and Brussels focused more on emerging artists and experimental programming. “The idea is for the artists we work with to show here, but I want to continue introducing new artists here as well,” he said.

Templon said that he wanted to open the New York space with an exhibition dedicated to Ba as a way to establish a “continuity” between the Brussels outpost, which he had previously run, and the New York one, which he now will manage; Ba had been the first artist Templon brought onto the gallery’s roster some seven years ago. “It was the time to show him in New York,” Templon added.

Ba is having somewhat of a moment in his career. Earlier this year, he had a survey at the Royal Museums of Fine Arts of Belgium in Brussels, which closed last month. In November, the Baltimore Museum of Art will host Ba’s first institutional exhibition in the U.S.

Ba has been working on this new body of work over the past six months, but because of his travel schedule, he finished many of the pieces at the New York gallery over the past several weeks. It was a welcome constraint he set for himself, the artist said. To create this series, Ba worked from a large set of unstretched canvas, painting interwoven scenes that he then divided and stretched onto multiple canvases. Many of them feature various flags in their backgrounds as a way to look at the power relationships between Africa and the West.

The artist is a veracious reader of both breaking news as well as literature, philosophy, and the folklore traditions of Senegal. The figures in these paintings place people from his life into composite scenes that reflect what is going on in the world within a mythological setting of Ba’s own making.

“The characters are metaphors of my own personality,” Ba said via a translator during a walkthrough of the exhibition. “With the experience of traveling the world, I developed this mix of the animal world, the human world, the political world, the mythological world—all mixed together.”

In La maison de l’exile (The House of Exile), for example, Ba shows a horse that has been cut in half, with the rear half of the horse growing into a man who wears a mask. He looks onto a small figure who appears to be chained, while a third figure looks at all of this. As with the rest of the works in the show, they are done in Ba’s signature style of highly embellished brushstrokes in which paint appears to be different media from feathers to beads.

“With Omar, the colors are vibrant, and the use of different techniques is important, and at the same time, while the works are beautiful to look at, they are very political,” Templon said. “There’s a real message about what it is to live in Africa today.”